Posted by Enrique at Wednesday, August 10, 2011 No comments: 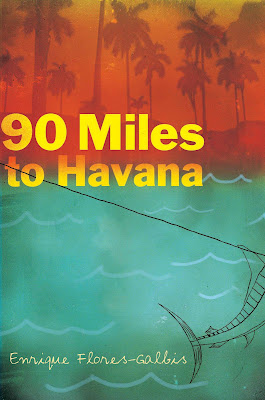 90 Miles to Havana
Julian witnesses the Cuban revolution and the events that lead his parents to send him and his brothers away to an uncertain fate in the overcrowded refugee camps of Operation Pedro Pan. In Miami Julian encounters Caballo, a dictator-bully, and Dolores, the camp’s kindly cook who tries to teach them about making change the democratic way, and not modeling on their recent turbulent history. When Julian decides to confront Caballo, he is forced to leave the camp, and then moves in with Tomas, an inventor, who is fixing up an abandoned boat to sail to Cuba to help his parents and others escape. Julian rises to the challenge and makes the trip possible when Tomas's plan hits a snag.
History

Operation Pedro Pan was a little publicized State Department Operation that enabled the exodus 14,000 unaccompanied children to the U.S. Not long after the Revolutionary Government began drifting left, nationalizing property, and closing schools, Radio Swan began broadcasting its ominous warnings into Cuba, frightening parents, and polarizing the population. As soldiers dug trenches in the beaches preparing for the Yankee invasion, parents, fearing they would lose custody of their children, made the difficult choice to send them to the Church run camps in Miami. 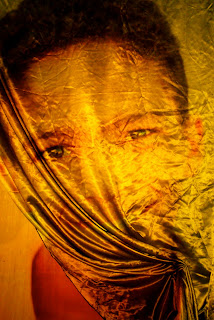 Writing 90 Miles.
Writing 90 Miles to Havana brought back images and events that I had stored safely away in that room under my hat where I put memories that should not be tampered with. Pen in hand, I would walk into that room every day and be surprised by the sights, sounds and emotions that were waiting to jump out at me.
Most of the memories were happy, they made me laugh. But there were those that were not so happy. The sad ones, I recorded and then quickly put back onto their dusty shelves where they belong. No sense carrying sad stuff around, it just gets in the way.
I was nine years old when my parents decided that my brothers and I would be safer in Miami, even though they had no clear idea what actually awaited us there. At the airport my father put on his best façade, smiled and then handed us each a box of good Cuban cigars, but my mother looked like a raindrop that was about to burst—straining to push back her tears. It wasn’t until I had children of my own that I began to understand the power of the emotions behind all that water that she was holding back that day.
I was trying to act cool like my two older brothers, when they opened the door to the runway. The fumes and noise of the airplane engines came roaring into the waiting room like an angry animal and  my cool started to melt.
As I ran across the hot tarmac, I felt my feet leave the ground and then I found myself floating, behind my brothers, watching three boys that looked just like us run up the steps, and then into to the big rumbling silver airplane.
That’s when I found out about the magic of floating.
I floated into to my seat, to Miami, past the man who took my box of cigars and then gave me ten dollars. I floated into Pedro Pan’s camp, and with my feet well off the ground, above it all, I was able to observe the strange goings on there. When when they finally let us go, I floated all the way to my uncle’s house. It took another year in America before I was able set my feet down on solid ground. I was finally here.
As I looked around the fifth school that I had attended that year, I realized that the kids here might speak a different language, and wear slightly different clothes, but I was sure that in our hearts we are all the same.
As I got older I never forgot how to float, I just learned how to use it in a different way, and for different reasons. I became a painter and then a writer. I earned my artist’s license and now I’m certified to float anywhere and at any time my heart desires.
The only thing that I still have not gotten used to in my new home is how cold the ocean is, just 90 miles from Havana.
One last thought that might interest you. 90 miles to Havana is a fictional account of historical events, which means that I used my happy as well as the not so happy memories in the story. Then with my artist’s license pinned to my shirt, I expanded the story so that it would feel and say what I wanted it to.
For instance, one of the main things that I remember about our time in the camp was that the adults weren’t around much, so the kids had to organize themselves the only way they knew how. They imitated what they had observed back in Cuba. I used this impression to create a parallel world in the camp where a one big kid and his friends ruled, and everybody else had to toe their line. Naturally not everybody wanted to get near their toe line, much less jump to their side of it. Some of the kids organized themselves into resistance groups with the sole purpose of making the camp dictator’s life so miserable that he would want to leave.
This was my way of giving you, the reader, a view through Julian’s eyes of how people behave when they find themselves under someone else’s thumb, and the situation that led to my brothers and I leaving our island, unescorted, along with 14,000 other lonely kids. I hope you enjoy the book. I enjoyed writing it.
*See Pages for School Visits and Author Talks
or Contact for Availability and Fees.
hflores@nyc.rr.com
Posted by Enrique at Friday, September 10, 2010 No comments: 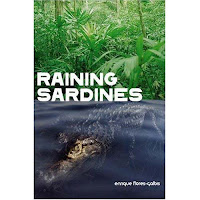 Raining Sardines, set in pre- revolutionary Cuba, 'Raining Sardines' received the America’s Award for YA literature for it’s accurate historical depiction of characters and events in a Latin American country.


Ernestina and Enriquito are as different as two people can be. Ernestina, the imaginative artist-dreamer, works from inspiration, while Enriquito the linear thinking, little engineer, plans, draws up lists, and gathers tools. Obstacles dissolve when they finally learn to combine their unique qualities. Ernestina and Enriquito follow a herd of wild Paso Fino Ponies to a secret valley where they discover Hatuey’s treasure.  The best friends must outsmart the huge Caiman guarding the treasure, and with the help of the townspeople, the mayor and the Gringo, they foil Don Rigol and his daughter’s plan to clear-cut the mountain, then claim the treasure, and the ponies. 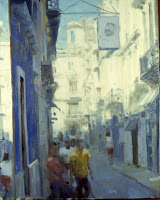 Most people don’t believe me when I tell them that on my first trip back to Havana, I could feel the ghosts whispering by me as I walked the once familiar streets. The ghosts rattled their satchels of bones, blew their stories into my ear and flushed the color and light back into my frozen memories. That’s when ‘Raining Sardines,’ was born. Then there are those who suspect that a novel named after a phenomenon as improbable as pigs flying would be just another magical tall tale made up out of thin air, the same air that ghosts breath. ‘Raining Sardines’ is based on reality– an interweavingof family stories, Cuban history, and scientific fact, but sometimesfacts are stranger than fiction. For instance, would you believe that a Cuban national hero who inspired legions of revolutionaries, can be found chilling in the foggy coolers of the better bodegas of my hometown New York? That frosty but handsome profile on bottles of Malta Hatuey, a sickly sweet malt drink belongs to the Hateuy, a proud cacique (leader) of the Tainos. To understand the full irony of his final resting place, you need to know a few of the facts of the life and fiery death of this almost mythical figure.
Hatuey witnessed the cruelty of the Spanish Conquistadors in Hispaniola and then rowed across the Windward Passage to warn his Cuban cousins of the coming plague. On a moonlight night he gathered the Tainos on the shore of a lake and gave an eloquent speech describing the ill treatment of his people at the hands of the gold crazed Spaniards, eloquently argued against the notion that they were gods. They were men he reasoned, but men that had been driven crazy by the god of gold. In conclusion he suggested that the only way to be free of the Spanish curse was to get rid of their gold. They danced all night in a great circle, threw their gold into the basket at Hatuey’s feet and then as the sun was rising they dropped the basket into a lake.
The first Cuban nationalist was eventually hunted down by the Spaniards, sentenced to death and tied to the stake. As the torchbearer approached, a priest promised him entry into heaven if he acknowledged Christ as his lord and savior. Of course Hatuey had to ask the logical question: “Will I find Spaniards in heaven?”
Upon receiving his answer, he nodded at the torch and famously ordered, “Light the fire.”
Hatuey’s words come down to us from the hand of Padre Bartolome de las Casas a Dominican priest who was the first advocate of the indigenous people in the New World. He faithfully recorded Hatuey’s eloquent speech and final words, as well as other eyewitness accounts of cruel encounters with the Tainos. These documents were presented to the King of Spain as a legal brief, a petition for the humane treatment of the Hatuey’s people.
Had it not been for de las Casas insistence on accurately recording the facts in the form of legal depositions, Hatuey’s story might have been considered just another apocryphal tale from an enchanted region whose image has sometimes been distorted by a little too much magic and not enough realism. Similarly, if it weren’t for scientific curiosity and an insistence on accurately recording the workings of the wind, waves and the ways of fish, we could not say with certainty that it not only rain sardines, but also lizards, toads and sometimes even small rodents.
There, now you know why Hatuey is in the freezer, and why I titled my first book Raining Sardines but as far as whispering ghosts, well, that’s a little harder to explain.